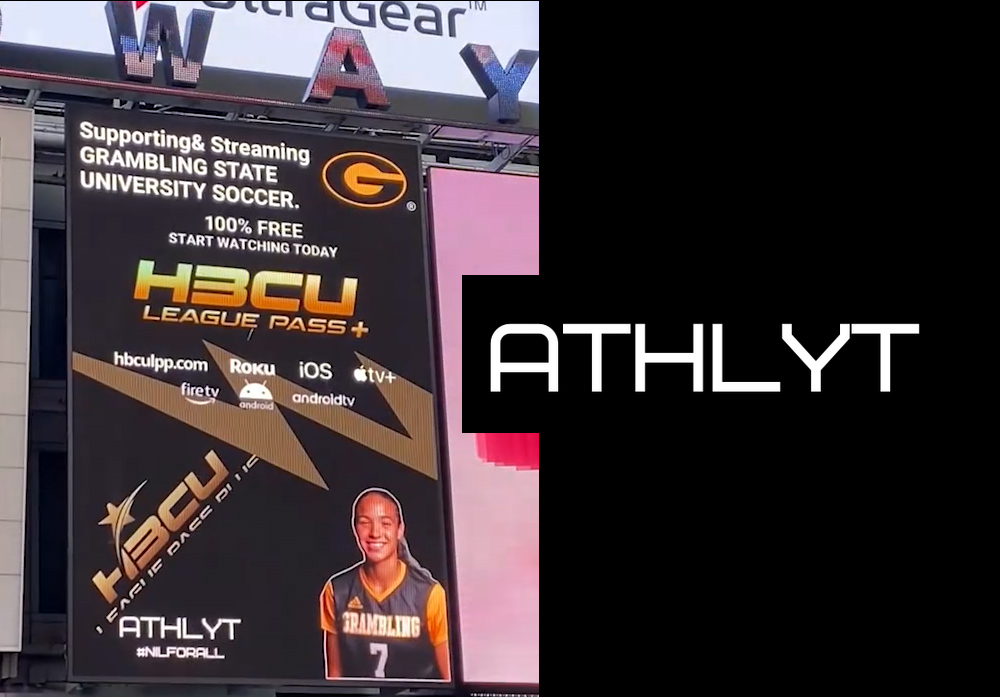 All Grambling State student-athletes offered a new NIL opportunity that involves having their image appear on a billboard in Times Square. | Images courtesy of the ATHLYT NIL platform.

Every student-athlete at the D1 historically black college/university (HBCU), Grambling State is offered an NIL deal through the combined efforts of Urban Edge Network’s HBCU League Pass+, the ATHLYT NIL platform, Blip Billboards, and Grambling State University. Through the efforts, each athlete receives an offer to appear, individually on an ad in Times Square for HBCU League Pass+, a 24/7 live and on-demand sports network focused on HBCU athletics.

Through this NIL deal, over 300 student-athletes have the opportunity to be paid to have their image featured on an ad located in the heart of Times-Square. Not only their image, but in their official Grambling State University school photo with school logo and apparel, something few schools allow under NIL deals. In addition, every participating athlete will have subsequent opportunities to further promote this campaign, as well as others, through the ATHLYT platform.

Ray Austin, co-founder and Chief Brand Officer of ATHLYT, the platform that facilitated the deal, is a former collegiate standout himself who turned NFL pro. “Equity is often a word used in the diversity and inclusion landscape, identifying ways that we can strive to provide a more even playing field for those who have been disenfranchised,” Austin stated. “Bringing NIL opportunities to historically black colleges and universities is a great first step in rewriting the narrative that you have to make it to the ‘big leagues’ in order to be successful.”

The ads are running on a digital-billboard located at 1540 Broadway, in the heart of Times Square, through ATHLYT’s partnership with Blip Billboards. Each participating athlete’s image will be displayed at least once, for fifteen seconds, as part of the campaign.

Dr. Trayvean Scott, Vice President for Intercollegiate Athletics at GSU, stated, “President Gallot and I believe strongly in supporting our student-athletes, on and off the field. This NIL opportunity is uniquely aligned with our school’s official motto: ‘Where Everybody Is Somebody’.”

Urban Edge Network (UEN) is a Black-owned media company focused on publishing and distributing content from HBCUs. Their mission is to connect brands with content and culture, while also providing the institutions with monetization opportunities.

ATHLYT is a name, image, likeness (NIL) platform co-founded by Ray Austin and casting director Brian Jagger with a focus and commitment to make NIL deals impactful, valuable, and most importantly, available for all. With their tagline “NIL for all” ATHLYT has helped facilitate over one-thousand individual NIL deals, mostly for student-athletes whose individual names, or even school names, are not well known; but they have avid followers, support, and with whom local and national brands want to work.

Part of America’s historically black college & university (HBCU) registry, located in central Louisiana, Grambling State University combines the academic strengths of a major university with the benefits of a small college, a combination that enables our students to grow and learn in a serene and positive environment. The school offers more than forty (40) undergraduate and graduate degree and certificate programs through four colleges, including two professional schools and a graduate school.

Blip Billboards allows small and medium-sized businesses to achieve greater flexibility, geographic reach, mass visibility, and more billboard campaign control than ever before. With Blip, advertisers have access to over 1,800 billboards across the United States.