Casey is a redshirt freshman from Plainville, Kansas. This was his first game taking offensive snaps after tight end Mason Fairchild suffered an injury in the second quarter. Casey saw some action on special teams earlier this season.

Applebee’s Neighborhood Grill and Bar started in Atlanta, Georgia in 1980. The chain now has almost 2,000 locations in the U.S. and around the world. 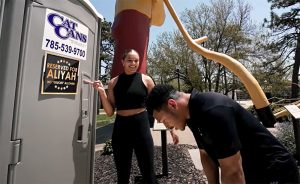